Here’s something that you may be surprised to see us talking about.  Although, anyone familiar with this blog over the past two years wouldn’t be at all surprised to see us talking about this after we spent multiple pages discussing the history of golf clothes!  Today, we want to talk about that stalwart of the Anglosphere, the English shooting jacket, or coat, if you prefer.

We’ve gone over the history of suits and some of their variations in the past. What’s relevant here is that by the 1800s, the modern “suit” had reached a point where you can easily trace all of the modern variations from it.  Its basic lines were very similar to the lines of today.  But, hilariously, the most common variations of suit jackets, the sport coats, have their origins in English military and hunting culture.  The blazer goes back to the H.M.S. Blazer, and its crew’s attempt in 1837 to impress Queen Victoria, who would be making a surprise visit, on the fly, resulting in a modified uniform that eventually became the blazer.  Meanwhile, the hacking jacket and shooting jackets, slightly more formal in lines than the blazer, birthed the basic sport coat that we think of now.  But, in England especially, the hacking jacket, made of wool or tweed with a single vent for horseback riding, and the shooting jacket, typified by a leather patch on the front shoulder to prevent wear from the butt of a weapon, and also made of wool or tweed, never completely gave way to the modern sport coat, and are still worn to hunt and ride.

The shooting jacket started life as the Norfolk jacket, a belted, single-breasted jacket with box pleats and a belt.  It was designed specifically so that it would not bind when the elbow was raised by the wearer to fire their weapon, and became popular during the 1860s in the Prince of Wales’ personal circle of hunting pals, eventually spreading to the general populace, as these things often do.  Its basic lines can still be found in military and police uniforms around the world, but it’s rarely seen as a shooting jacket in its own right anymore. 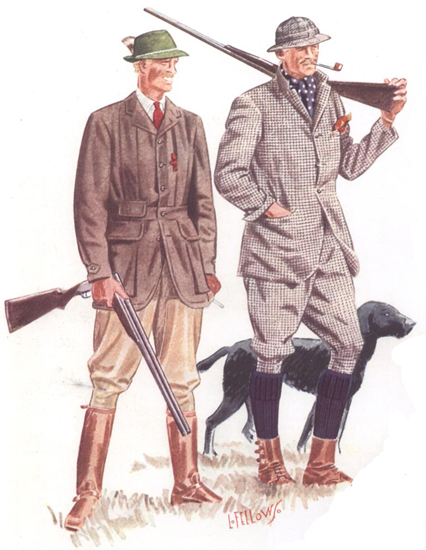 Over time, the shooting jacket evolved into what we see today: a jacket similar in lines to other sport coats, but made with a shoulder patch to absorb weapon recoil, and made of stronger materials to withstand rain, burrs and shotgun scorching.  The materials chosen, wool and tweed, are for just that, to withstand the elements.  The lines are what we would, in the present, consider “formal,” because that was the fashion of the Victorian Era that birthed it: formality in all occasions, even the informal.  It is, in many ways, simply a more utilitarian suit jacket.  Larger buttons on the pockets are there to keep them closed, even while running at a clip, so that items won’t fall out, the elbows are fitted for the wearer to allow for easy raising of the arms to aim and shoot, without disrupting the wear of the jacket, et cetera.

While style didn’t truly enter into the equation when they first came into being, now, shooting jackets are a style statement in their own right.  Modern hunters frequently wear clothes designed purely for function, that are sometimes beyond unattractive…

So, some people, including in the US, where the shooting jacket never truly caught on, are going back to the wool and tweed jackets of yore, to hunt in style.

To that end, we’ve jumped into the fray, making our own English shooting jacket for the express purpose of having it auctioned off at a Naples, FL wine festival.  Made of a thick wool tweed with intricate detailing throughout, with upper shoulder and chest patches for resting the gun, and to receive the recoil of a long arm.  The elbow patches are a stylish touch, and also for durability when shooting.  There’s extra tension in the elbow region when positioning oneself to shoot, an inverted pleat down the back, patch pocketing, and a half-belt along the back waist, all adding to the unique look and style of the jacket.  We’re really proud of this one, so take a look at it below!  Hopefully, our minor contribution can help these lovely jackets get a new foothold in the hearts of hunters and shooters in the US.

4 thoughts on “Revenge of the English Shooting Jacket”