Once again, we’re going to take a moment to point out a special appearance by Joey…

Joseph’s is in Life in Naples‘ latest issue, on newsstands in Southwest Florida right now!  If you don’t live in an area where you can see it for yourself, check out the online version right here.  And be sure to keep a look out for us in future news stories in Southwest Florida and Long Island!  Our pals at MARKIT Group are always doing their best to get us the best media coverage!

Last week, we took a quick look at the three new uniforms being donned by NFL teams this year (we were fans of only the one).  Well, we’re another week closer to the official start of football season, so let’s take a look at the other 29 uniforms, too, and pick the three best and the three worst of them. 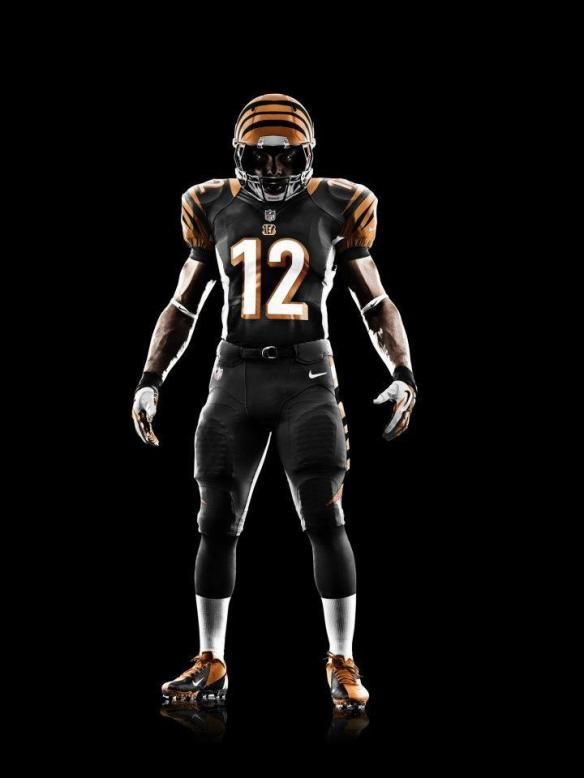 This one is always controversial.  Some people love it, some people hate it, and no one is in-between.  We actually like the colors and the basic lines…  But the stripes.  Oh, the stripes.  This uniform makes the team look like they came onto the field via a time warp hidden inside your trapper keeper in 1987.  Considering the Bengals’ history since the ’80s ended, maybe that’s not surprising.  The helmet stripes aren’t that offensive, but using the pattern in place of stripes, like some kind of unholy union between football and the female cast of “The Jersey Shore”?  No, no, no.

Yeah, we’re pretty much required by football law to have this one on the “best” list.  It’s just a classic in every way.  Virtually unchanged in 40 years, and with good reason.  The colors are fantastic, the use of them is great, and balanced, the lines and fonts are old-fashioned, but in a wonderfully classic way, not a way that feels “old”…  Even the borderline absurd pirate logo is perfect (can you imagine what horrors would have come out of some ’90s or early 2000s redesign?). 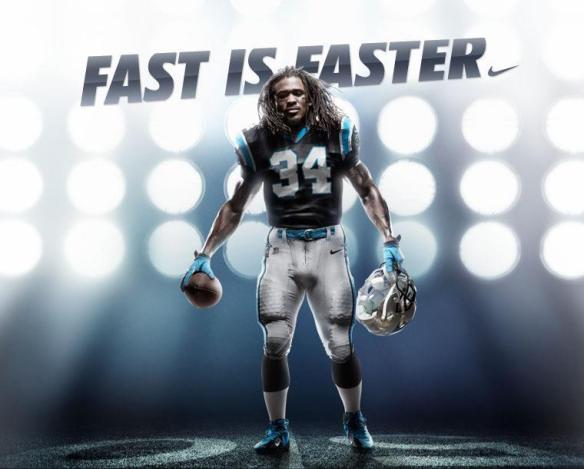 So, so dated.  The Panthers uniform is another that has barely changed over the years…  And that is not a good thing.  The Panthers debuted in 1995, and boy, does it show.  The stripes are too wide and awkwardly placed, and that fluorescent blue is eye damaging. 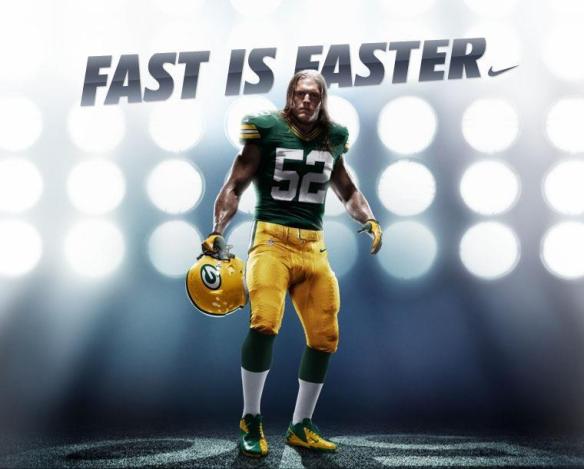 The Packers uniform almost always tops these sorts of lists.  They are, like the Raiders uniform, a perfect example of only making minor tweaks to an otherwise unchanging design over the decades to amazing effect.  The color combo of deep green and yellow is surprisingly pleasing to the eye (we dare you to try wearing street clothes that color and making it work), and the logo is as perfect as sports logos get.  The image of the uniform by itself automatically brings to mind images of Brett Favre, Bart Starr, Aaron Rogers, and the entire state of Wisconsin.

Oh, yes, here it is again.  Just like last week, this one is just the worst.  The worst of all 32, in fact.  As we said then, the almost embarrassing attempt to be “XTREEEEEM” is terribly done, with the absurd shoulder stripes, chest badge, and insane two-toned helmet.  It looks like something a supervillain in a comic book circa 1994 would wear.

Perfect, in every way.  The wonderful, old-fashioned stripes, the great combo of navy blue and burnt orange with white, the “GSH” label honoring George Hallas…  Classy from top to bottom.  The logo isn’t quite as good as the Packers logo, but it’s close.  And, a special bonus, it looks just as good in its road colors as in its home colors, something you don’t see often in the NFL.

Our beloved football season is almost here again, and what better way to celebrate than with a quick look at the minor “fashion” changes in the league this year.  Namely, the new uniforms three teams have adopted.  Let’s dive right in!

Very nice.  Very, very nice.  The Vikings have fully embraced their true purple color scheme now, eliminating the white and yellow highlights nearly across the board, and brightening the purple to a much more vibrant shade.  The leg stripes are gone altogether, while the sleeve stripes have been greatly minimized. There’s also some minor, nifty altered touches to the fonts on the uniforms, too.

The logo was only slightly changed, with the viking’s hair braids a bit looser, his horns a bit more curved.  Don’t mess with a classic!  This is  a pitch perfect modernization of an otherwise set-in-stone, and classic look.  Perfect. 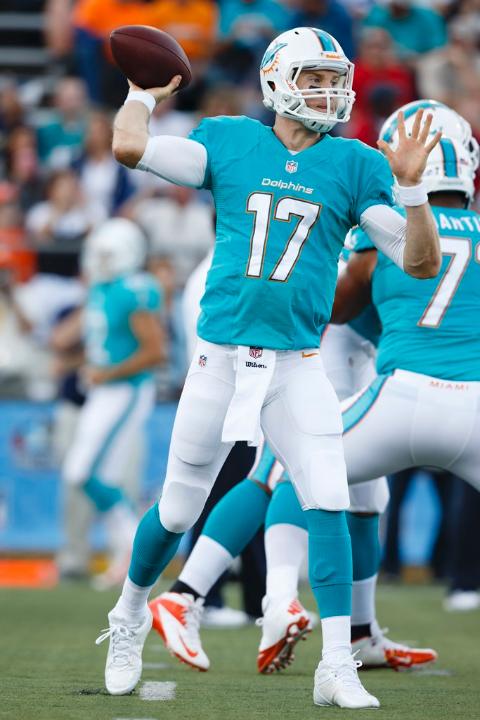 Less perfect, but still pretty good.  The colors appear to have been made more vibrant, just like the Vikings upgrade, and the fonts have been made more futuristic.  The orange in the uniforms has all but disappeared, relegated to only minor touches here and there. 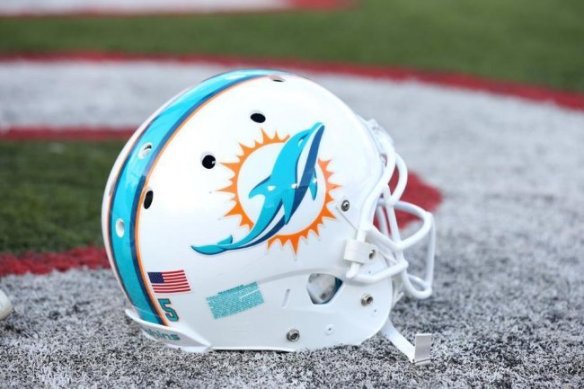 The logo, on the other hand, has undergone a complete makeover, with the old dolphin, which had barely changed since the team’s inception, replaced with an entirely new one.  It’s in a different position than the old, and instead of leaning down, as if jumping through something, is now pointed upwards, soaring into a jump.  We’re not sure about it, it’s a bit bland, and the old logo, though it was kind of silly, was honestly lovable.

…Oh.  Oh, dear.  Well, points for trying something new, at least.  This one is a nearly complete overhaul, and virtually eliminates the teal in the uniform in favor of black and more black.  Do we really need another all-black uniform in the league?  But the minor details are a bit bonkers.  It looks like they’re trying to attract the middle school set…  Circa 1993.  Everything is XTREEEEM (if you were a kid in the late ’80s/early ’90s, you will instantly know what we mean)!  The spikes on the fonts, and the stripes on the shoulders look more at home on a supervillan than a football team.  And what’s with the sleeves being different colors?  We are not fans.

Agh!  What?  The logo has been updated a bit, with slightly altered, more rounded and realistic features on the Jaguar head: this we like.  But a two-tone helmet?  It’s unique, we’ll give them that, but it looks a little too much like a college team, to be honest.  They could look truly awful in bright Florida sunshine.

As we’ve gone over in the past, uniforms can really go a long way towards making or breaking the look of a nation’s military.  They have to embody the nation’s central values, look imposing to enemies and reassuring to friends, and be wearable, day-to-day, during the rigorous tasks required of a member of the military.  No small order!

There are remarkably effective examples of uniforms throughout history, from the regal authority of the modern British uniform, to the “people’s” uniformity of the old Soviet duty uniforms, to the ultra Imperialism perfectly embodied by the German Imperial uniforms of the Victorian Era, to the charming old-fashioned frontierism of the Royal Canadian Mounted Police uniform.

Modern uniforms tend to come in three varieties.  There’s the “Combat Uniform,” which is the camouflage patterned fatigues you’re used to seeing in the movies, mostly on enlisted infantry, though in reality, everyone wears them.  They’re used for day-to-day duty and combat, and are usually in a camouflage pattern, which are specifically designed for specific combat roles by the military in question.  They’re roughly equivalent to business casual in an office.

The second type are the Service or Service Dress Uniforms, the uniforms people mentally associate with officers, but that are actually worn by everyone when appropriate.  They are roughly equivalent to a standard business suit, and are worn for semi-formal functions, like serving on a court-martial, when reporting for duty, or when making official visits.

And finally, the third kind of uniforms are the Mess Dress or Dress Uniforms.  Equivalent to a tuxedo, these are worn at formal functions, and are extremely ornate, covered with every medal, ribbon, rank, and insignia the wearer has earned.

So, how is the United States doing right now with its uniforms?  That’s a difficult question to answer, since the U.S. has gone through so many uniform variations over the years that some of the older variants look like they’re from another country, maybe another planet!  What’s more, the Uniform Code can be so complex, one is forced to ask, “which uniform?” far too often in any total examination.  Instead, take a look at this gallery of the current uniforms of the five branches of the United States Armed Forces, and judge for yourself.  Our personal favorites are the Marine Officer Dress and Navy Dress Whites.  It’s next to impossible to not look impressive in those!

We all know the world’s fashion capitals are New York, London, Milan, Paris, Tokyo, Rio de Janeiro, Johannesburg, and Sydney.  But what about the world’s fashion districts?  Neighborhoods famed for the production and sale of high-end fashion?  They’re a dying breed, with most of the production moving all over the world, and most of the designers moving to the “fashion avenues” that can be found in many of the world’s largest cities, like Saville Row or Bond Street.  But a handful of these neighborhoods exist, and although they’re mostly of historical interest, they’re still full of points of fashion interest, and you’re guaranteed to find some amazing clothes in them.