As we’ve said many times in the past (especially when it’s football season, but then, we’re biased), we’re big fans of sports.  But being in two locations, one of which is in the largest metro area in the United States, makes us very lucky.  We have so many teams to choose from!  Our Huntington showroom is well within “fan territory” of 9 New York-based and 1 New Jersey-based major league sports teams, and our Naples office is inside the fan range of both the 3 Tampa-area teams and the 4 Miami-area teams.  Throw in an Orlando team for good measure!  The point is, we have an embarrassment of sports riches, but not everyone is so lucky.  The folks over at Deadspin put together a great little study that shows exactly what we mean.  They ran calculations to figure out the range at which two-thirds of all Americans live from a particular member of the “Big Five’s” major league sports teams.  Here’s what they came up with, in map form: 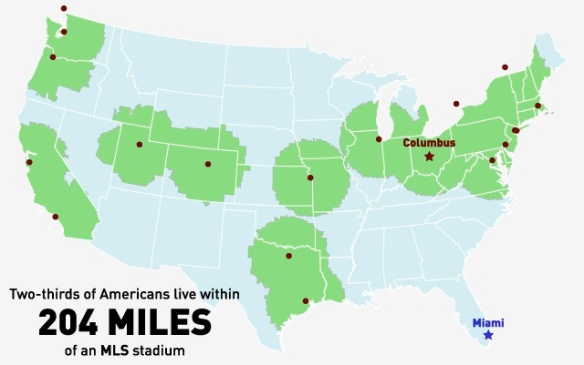 In short, if you’re a football fan or basketball fan, odds are good you’re not TOO far from a team.  Soccer fans and hockey fans aren’t so lucky.  Check out the full article for some more insights, and happy cheering!